For our subscribers that’s far below average.

We averaged 31% per year while gold’s up an average 7% per year: 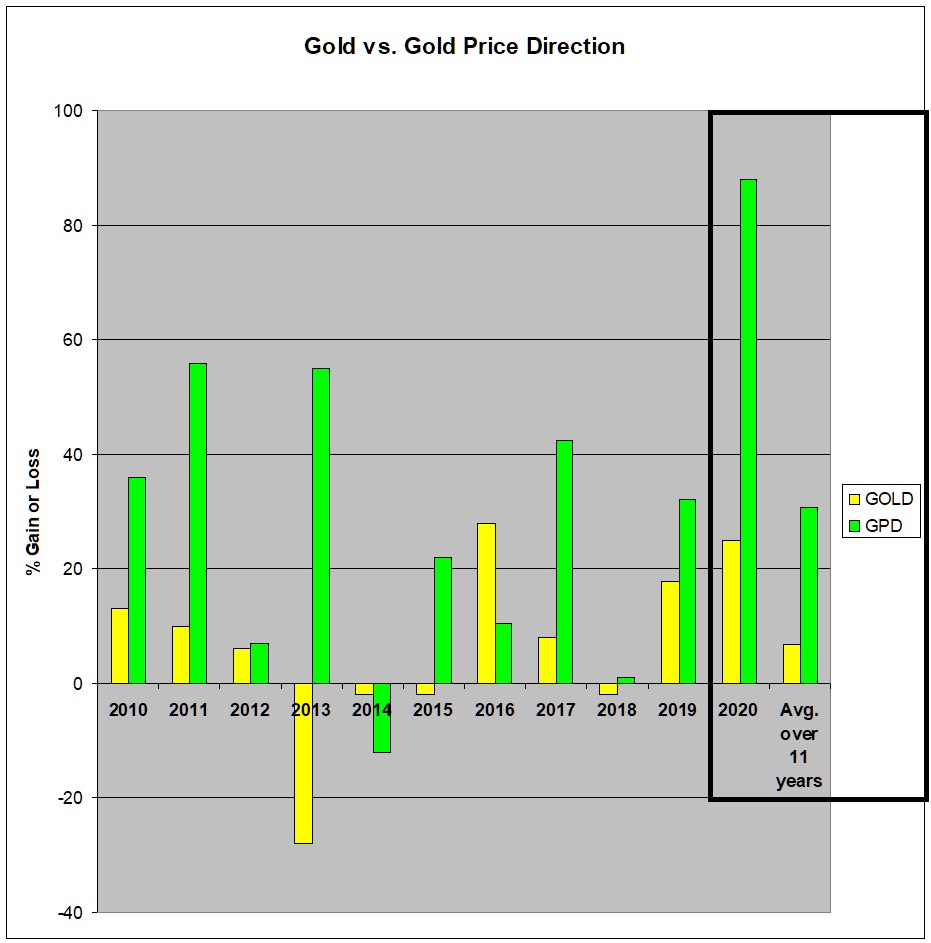 Our actual year-over-year results look like this when compounded annually (as of Dec. 31, 2020): 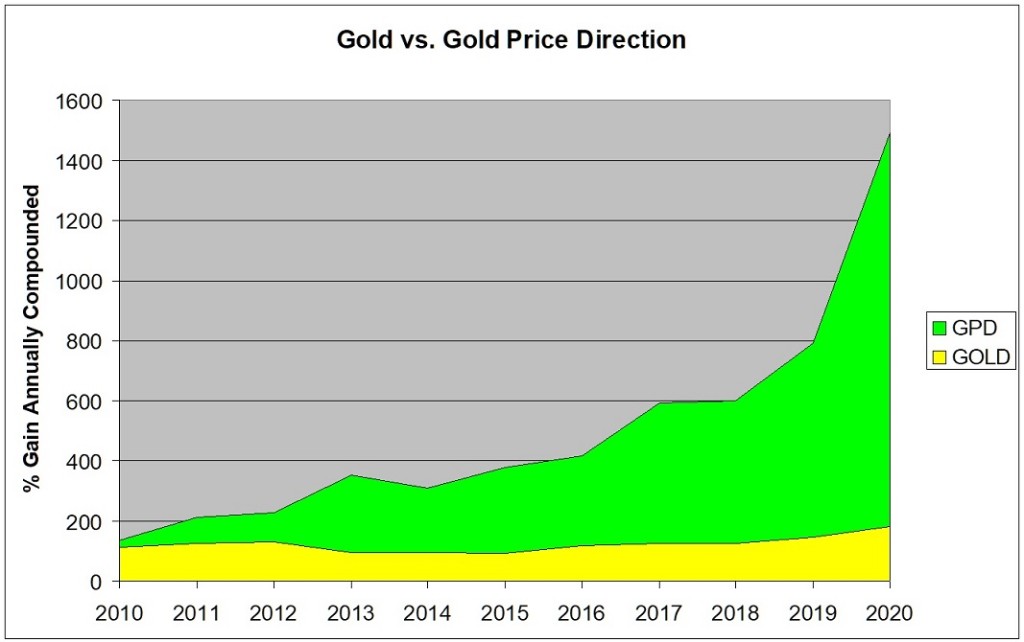 Surprising as that seems, it doesn’t even include the stellar stock market calls we’ve made.

“Our target for equities is far lower. This is not a safe environment for holding stocks. VXX should pay off exceptionally once stocks turn decidedly lower.”

VXX gained 500% within two months as stocks suffered one of the worst, most rapid crashes in history.

On March 20 we turned bullish on stocks for the first time this year.

The next day markets bottomed and rallied in spectacular fashion into early June.

On June 5, at exact top of a historic 2.5-month rally, we turned correctly bearish again.

Stocks then plunged, with the Dow losing over 2700 points within two weeks!

Over the next two weeks gold dropped $200, at which point we bought that position back.

A few days later gold was $225 higher and headlines read: “Gold surges most since 2009″

We’ve also offered several junior venture resource stock ideas that multiplied an average 3.5x through 2020, which are NOT included in our track record shown above.

This means that as incredible as our record may seem, it’s actually understated.

Here’s an example, Falcon Gold, up over 700% for subscribers:

As wonderful as that all is, at some point gold, silver and related stocks will plunge.

IS YOUR GOLD EXPOSURE HEDGED?

WILL YOU KNOW WHEN TO SHORT, COVER, OR GO LONG?

Gold Price Direction enables you to profit whether gold goes up or down!

“Over the years I’ve spent literally tens of thousands of dollars on a wide variety of investment advisories.  None have proven to be as simple to follow and as effectively profitable as yours.  Nothing has even come close.  My family and I thank you sincerely.” – DS, Australia

Will we next enter a long or short position?

One of many examples:

On August 30, 2019 we suggested a gold-related SHORT position.

Gold peaked 2 days later and the suggested short position offered a gain of 36% within two weeks!

Find out what’s next.

“Equities have arguably gone parabolic, action typically found at the end of bull markets.  Sentiment, momentum and most fundamental measures are at historic extremes and becoming more extreme by the day.  Defensive and bearish positions are prudent.  If considering shorting the general market aggressively, TZA is compelling…”

Within two weeks that call was 40% higher!

In December 2018 our suggested stock market short positions were up an average of 60%!

“We maintain that the lows of early December will likely mark the bottom [in gold] for weeks and months to come, and the possibility is very high for the largest rally since the highs of 2011.“

“We should have a bullish signal this week. Aggressive speculators may wish to attempt to front-run it by going long gold immediately.“

A few days later we reported a bullish signal in our proprietary algorithm.  Here’s a gold chart for reference:

Compare the above to what “experts” were touting at the time:

OUR RECORD IS THE BEST THERE IS.

Even if you’ve no interest in gold, our service offers your best chance to beat the stock market.

No day-trading, penny stocks, options contracts or margin debt is required to achieve these results!

Our recommended positions are easily and inexpensively traded through any brokerage account.

Plus we give you a 100% money-back, no-questions-asked satisfaction guarantee.

One last example:  No “expert” analysts predicted gold would plunge in 2013, but we did! 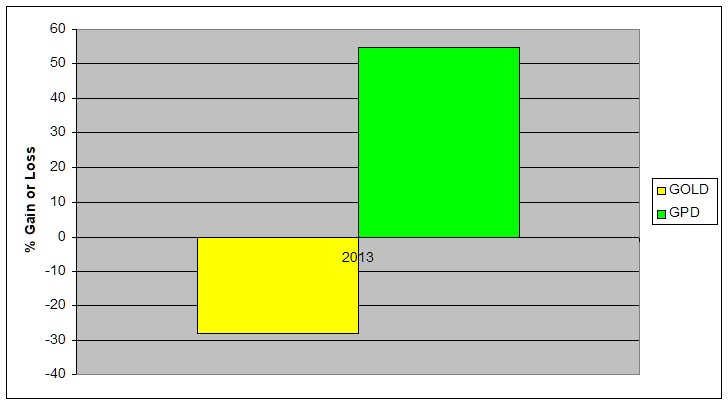 Compare that to one of the largest gold-related hedge funds on earth, shown below.

Note that in 2011 & 2012 these experts somehow managed to lose massive amounts of client money, possibly your money, while gold and stock markets actually went up! 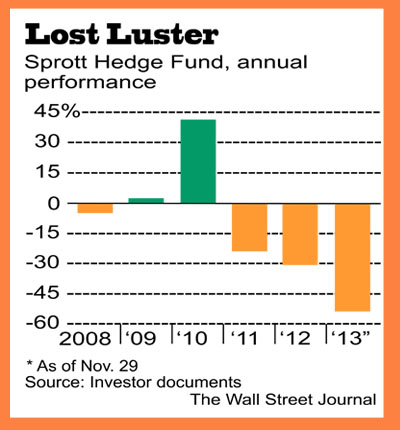 That disaster wasn’t a one-off.

While our subscribers were having a banner year, these were the headlines: 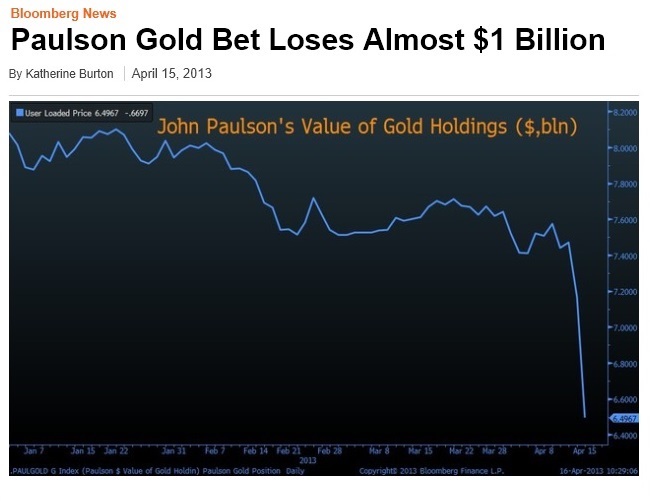